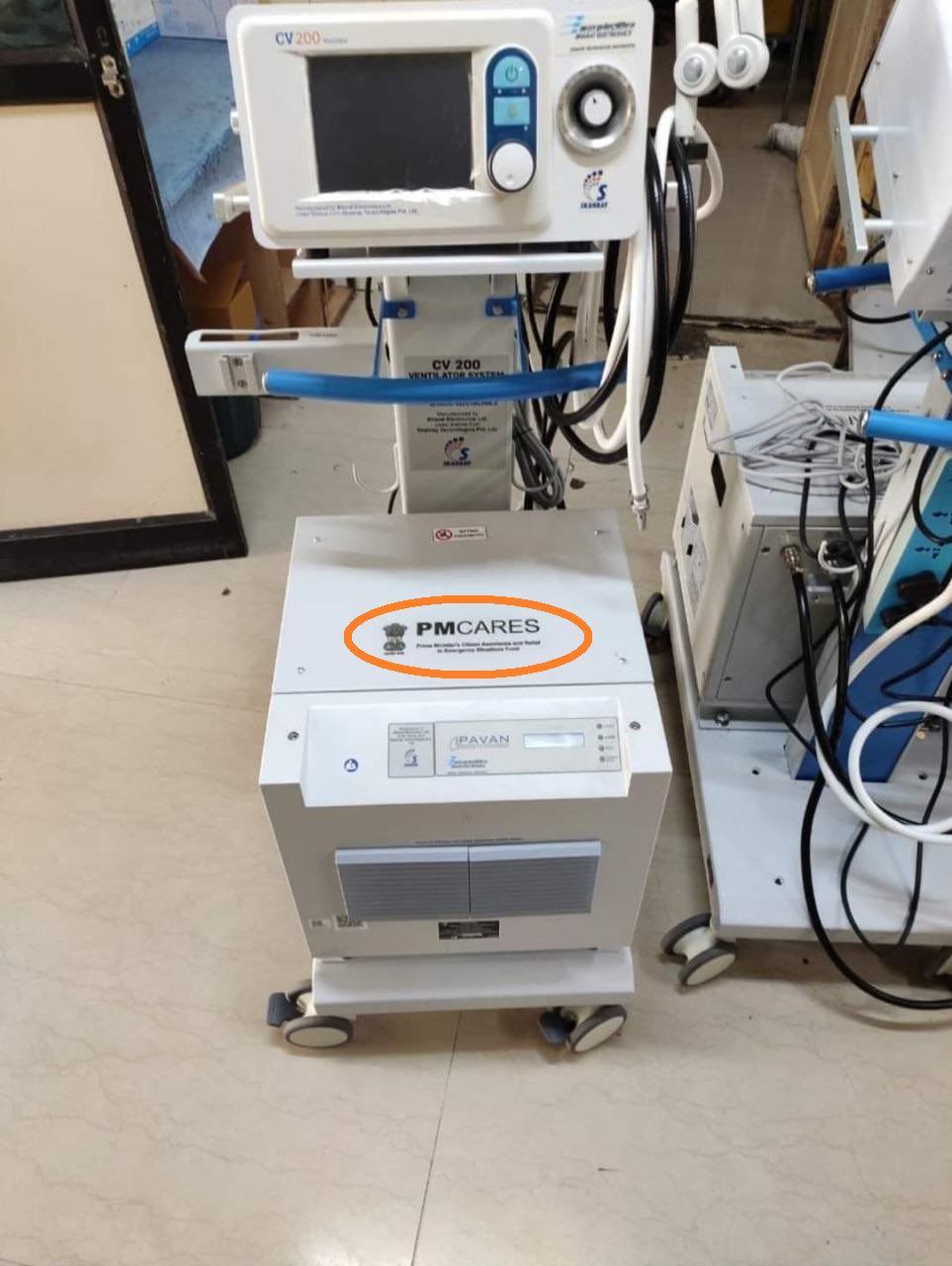 A genuine puzzle about the price of procurement of ventilators in India has presented itself. Ventilators provide mechanical airing by moving breathable air into and out of the lungs of a patient to deliver breaths to someone physically unable to breathe, or breathing insufficiently. They are an essential feature of any hospital with intensive care units and ‘ventilator’ has become a house-hold word in the context of the COVID-19 pandemic.

As the pandemic progressed, governments around the world, including the government of India, scrambled to acquire sufficient numbers of ventilators. So let us follow, using news reports, the trajectory of events that led to the ‘ventilator puzzle’.

21 March: Kiran Mazumdar Shaw tells the Modi government to buy more ventilators … She recommends Skanray, founded in 2007 by a team of 40 medical engineers who built high-frequency X-ray machines and sold them for half the market price. She does not reveal the price of the ventilator directly but we can expect it to be cheaper than half of international prices.

27 March: “Trump orders GM to make coronavirus ventilators, which GM was already rushing to do” and incidentally we learn that their low cost ” Ventec ventilators, which are portable and can handle intensive care patients, cost about $18,000 each”

31 March: Indigenous ventilators (rightly) being promoted – The government is reported to have placed an order with “Bharat Electronic and Skanray Technologies to manufacture 30,000 ventilators, while a second order for 10,000 ventilators has been given to a consortium of Maruti Suzuki and Noida-based ventilator maker AgVa Healthcare.” “A basic ventilator with majority parts sourced locally is priced at Rs 1.5 lakh and can go up to Rs 2 to Rs 2.5 lakh” says a representative of AgVa health care. Presumably the rival company, Skanray, offered a similar price.

15 May: ” … Mahindra had announced that its ventilators would be much cheaper than imported ventilators priced at between Rs 5 and 10 lakhs“

22 May: “…Two firms bagged the contract — Mysuru-based Skanray Technologies, for 30,000 units, and Noida-based start-up AgVa Healthcare, for 10,000 units… the ventilators that AgVa is making are suitable for ICU operations… Each of its units costs around ₹1.48 lakh while imported ones are priced at least five times more.”

15 June: Low prices of indigenously sourced ventilators continue to be reported “Nevertheless he did not inform how much it would price for personal hospitals as the ventilators have been produced on the purchase of federal government, a person estimate by The pioneer states that the price for it comes all around Rs 1 lakh.”

15 June: Twitter is awash with images of a ventilator machine bearing the sticker “PMCARES”. It is a Skanray CV200 model as can be clearly seen written on the machine.

16 June: Activist Saket Gokhale points out that “while the market price of the CV200 ventilator is 2.5 lakhs/piece, PM CARES is claiming to spend 2000 crores. Purchasing 50,000 CV 200 ventilators at market price would cost 1250 crores” He adds ” Then where’s the remaining 750 crores going?”

18 June: Gokhale is challenged and slandered. “Chairman & MD of govt-owned BEL has threatened me with legal action for exposing the PM CARES ventilator scam. He forgot that BEL comes under RTI Act. Filed an RTI with BEL asking how many BEL Skanray CV200 ventilators were sold with funds under PM CARES & at what price.”

Meanwhile, google search still shows price as 2.5 lakhs, though the website itself shows the revised price.

An opinion website that likes to masquerade as ‘news portal’ published an article, purporting to be ‘fact check’, and trying to find holes in Gokhale’s analysis (we shall not provide a link to this article since we do not encourage fake news. Instead, please refer to this article that talks about why the concerned news portal was denied fact-checker status by an international fact-checking body). At the heart of the argument is the fact that the price of the ventilator is (now) Rs 11 lakhs per unit. Along the way, the author insinuates that the ventilator is not a Phillips product as claimed by Saket Gokhale. CMD of BEL is quoted as saying “It appears as though a fictitious product under the brand name of Philips is being promoted on virtual marketplace”.

The first point was explored above and we’ll come back to it below. The second point is even more puzzling because the ventilator in question, on the website, is marked as “designed and manufactured by Skanray for the Govt. of India, Epidemic emergency management programme.” Is Skanray making two different models, both called CV200 and both made for the government of India, one in collaboration with Phillips and the other not? Hardly believable! As an aside, Phillips has been a partner of Skanray already; and a fun fact: BEL also makes our voting machines and refused to reveal the details of how EVM/VVPAT data is checked.

Let us now go back to the crux of the matter – what is the price of a ventilator? A sage advice found on the net was “Think of ventilators as customizable pieces of equipment. It’s similar to how you might customize a new car. Portable ventilators cost from $5,000 (for simple vents) to $15,000 for advanced vents. Basically, the more bells and whistles you add, the more it will cost.” Indeed!

Since we are in an emergency pandemic, and in a not-so-rich country, we are probably looking at a bells and whistles free option. A basic model perfected by Phillips in the USA apparently was costed at $3280. $3280 = 250,587 INR: almost exactly 2.5 lakhs – that happens to be the originally listed price of the Skanray CV200 ventilator. If the price was indeed raised to 11 lakhs, as shown at the website, this would amount to $14419 – that is very very high even by international price standards.

If we follow Saket Gokhale’s calculation in reverse, we see that each ventilator should cost Rs 4 lakh. That is still very high compared to numbers quoted in the timeline. So the question arises, why is Skanray charging more than international rates to the Indian government for ventilators that are supposedly indigenously manufactured?

Skanray and its collaborators at BEL and Mahindra have never revealed the price of their products to the media. However, rival company AgVa health care, collaborating with Maruti have quoted 1.5 to 2.5 lakhs to cnbctv. Both Skanray and AgVa already made ventilators, the tie-up with car manufacturers enables them to scale-up, by use of modified assembly lines. It is very good news that India is finally to get indigenously produced (even though not fully indigenously designed) ventilators but the confusion over the price casts a shadow over the effort. So the puzzle remains: what is the cost of the “PMCARES”-stamped ventilators we saw in BJP orchestrated tweets, and 50, 000 of which will be procured for Indian health care? If it is 2.5 lakhs, where is the rest of the money going? If it is 4 lakhs, why is the price so high? If it is 11 lakhs, why is there no action against Skanray for blatant robbery?

Multiple media reports published a story on Bhutan stopping the flow of irrigation water on an irrigation channel along its border with India near Assam,...
Read more

Multiple media reports published a story on Bhutan stopping the flow of irrigation water on an irrigation channel along its border with India near Assam,...
Read more
Fact Check

A genuine puzzle about the price of procurement of ventilators in India has presented itself. Ventilators provide mechanical airing by moving breathable...
Read more

False news is harmful to our community, it makes the world less informed, and it erodes trust. It's not a new phenomenon, and all of us — tech companies, media companies, newsrooms, teachers — have a responsibility to do our part in addressing it.

Dubai: Noora Al Ghurair, an Emirati businesswoman, called out Tejaswi Surya for his racist tweet against Arabs. She shared the screenshot of...
Read more

A video of an elderly man is viral on Social Media claiming that the man was sprinkling urine on the bananas which...
Read more

UN human rights experts on Friday called on India to release protesters who were detained two months ago when they were protesting...
Read more

Multiple media reports published a story on Bhutan stopping the flow of irrigation water on an irrigation channel along its border with India near Assam,...
Read more